Read the following text and answer the questions at the end.

Two men crept ever closer. Clouds shifted. Moonlight seeped into the dark night. The figures paused. “How on earth…?” Will Scarlett’s whisper was swallowed by the blackness as the battlements of Nottingham Castle were revealed. “We’ll never get in there, Robin.” No reply came, so Will turned. He could see Robin’s furrowed brow as his eyes scanned the castle defences. It was six hours since Maid Marian had disappeared. Their clothes still reeked from the smoke of the hamlet the Sheriff’s men had torched and where Marion had been giving food to the poor. Robin’s face, taut with anger and determination, was reply enough. To their right was the drawbridge that led to the gatehouse. The sharpened teeth of the portcullis warned against entering the very mouth of the castle. The outer curtain walls reared above them, arrow slits within the crenulated stone. Chain mail rattled as they walked the battlements, their shadows gliding across the keep behind them. 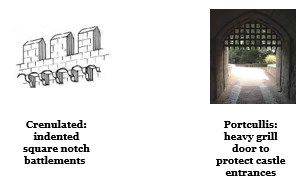 With that, Robin stepped out onto the highway. He hoisted his heavy sack onto his broad shoulders, nestling next to his bow and quiver. The smell of stale ale from Ye Olde Trip to Jerusalem lingered together with the sound of the last singing drunk. Robin ducked swiftly though the inn’s courtyard and to the stables behind. Will strode after him, shaking his head. Wherever he was going, he was sure to be going in to trouble.

Will saw Robin flitting to the back of the stables, where an outcrop of rock jutted out below the castle. As he came up closer to him, he stepped behind a huge tree trunk and began feeling along the sandstone wall. “Help me, Will.”

“What am I looking for?”

“ There should be an outline of a King’s crown chiselled into the rock. King Edward used it to get into the castle to murder Mortimer, long ago. They never knew how he got in.”

“My father served King Edward, the hole that is behind here leads right up into the castle, he was with him the night Mortimer was killed.”

“It’s not on the wall at all but here, Robin, on the floor.” He placed Robin’s palm onto a carved crown. As soon as Robin felt it he stood up and kicked hard. Once. Silence. More silence. Will dared not breathe. Glancing down he saw that inside the crown was a heavy, iron ring. They both grasped it and heaved. The earth beneath them moved aside and revealed a gaping hole, Mortimer’s hole. 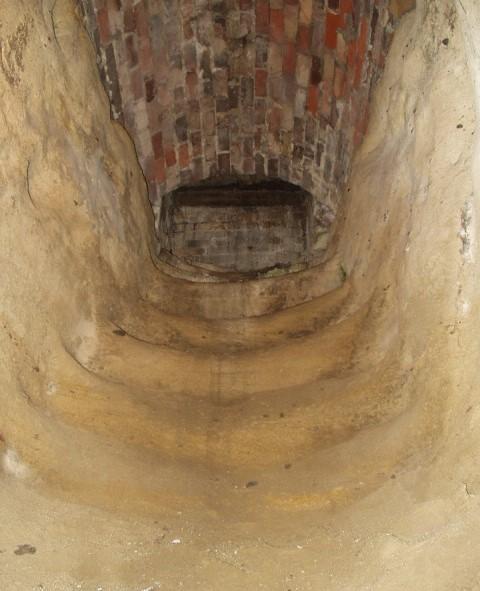 We’ve no light, thought Will. No shields, no hauberks … no idea where we are going to come out…but then neither have they… The passage led down on sandstone steps, but quickly it begin to rise up, winding their path into the castle. Robin and Will slipped stealthily into the heart of danger. At last their way was blocked by an iron gate that rose above them. "See that, Will. The light?” Will nodded.

“That shines down onto the dungeon where I reckon they’ll have Marion. Some fool seems to have left the gate ajar. Come on.” Crouching as they eased their way up the steps, they prepared every muscle to spring should there be a trap. Robin glanced through the gaps, his eyes slowly finding the iron grille that covered the dungeon hole. 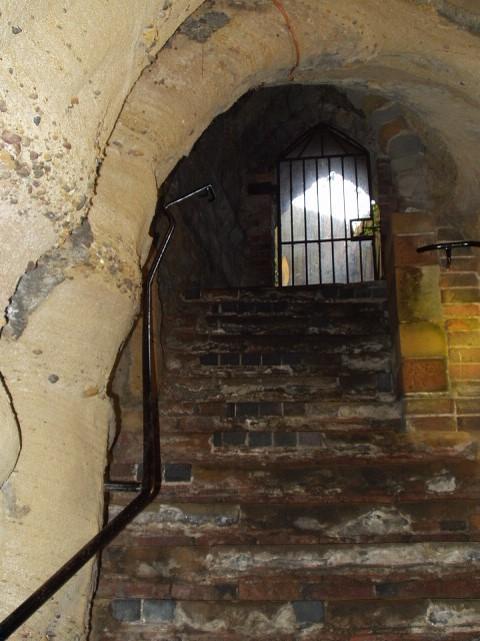 They slid through the open gate and peered down into the dungeon. Eyes adjusted to the dark, cavernous pit.

“There!” Will could see the cloak of a woman huddled and curled around her knees but with eyes of fire. Clink!

Robin reeled around in time to evade a towering blow from a gleaming sword. “Trapped!” roared a voice that Robin knew only too well, “like rats at the cheese…”

1.Who has been captured by the Sheriff?
2.Who is Will with as he tries to free Maid Marian?
3.Why do you think they don’t try to sneak in through the castle walls?
4.Where do they go instead?
5.What secret symbol are they looking for?
6.The passage leads to a dungeon. Do you think a fool really left the gate unlocked? Why not?
7.Robin recognises the voice, so who do you think it is that has trapped them?
Top
Cookie information
Cookie Notice