L.O: To know about invasions and settlements.

In 410 AD, the Romans left Britain to go and protect their country as it was under threat, which left the UK left to its own devices after 400 years of being ruled by the Romans. One group who invade was the Scots. The Gaelic speaking Scotti who came from Ireland were descendants of the Picts who had earlier invaded Ireland, around 200AD. Historians believe that these Irish Scots invaded and claimed land in Scotland in the 4th and 5th centuries.

However, the Scots weren’t the only group who invaded. Other Germanic tribes had also been invading Britain for some time, and without Roman protection they proved to be a formidable force against the Brits. These invaders are known to us as The Anglo-Saxons because the two biggest invading tribes were the Angles and the Saxons.

Other invaders were the Jutes, Franks and Frisians. They came from the modern places of Germany, Holland and Denmark.

Have a look at the map below that shows routes of invasions and settlements. Can you answer the different questions? Use the maps from previous weeks to help you. 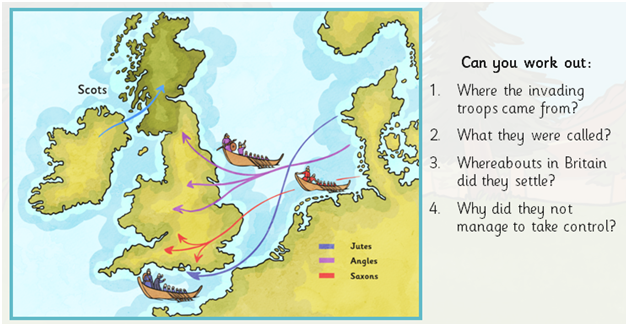