Read the story of the Tin Forest again to refresh your memory.

There was once a wide, windswept place, near nowhere and close to forgotten, that was filled with all the things that no one wanted. Right in the middle was a small house, with small windows, that looked out on other people’s rubbish and bad weather.

In the house lived an old man. Every day, he tried to tidy away the rubbish, sifting and sorting, burning and burying. And every night, the old man dreamed. He dreamed he lived in a jungle full of wild forest animals. There were colourful birds, tropical trees, exotic flowers, toucans, tree frogs and tigers. But when he awoke, his world outside was still the same.

Then one day, across the windswept plain the wind swept a small bird. The old man spilled crumbs from his sandwiches onto the ground. The bird ate the crumbs and perched to sing in the branches of a tin tree. But the next morning, the visitor was gone. All day, the old man walked through the silence and his heart ached with emptiness.

That night, by moonlight, he made a wish…

In the morning, the old man woke to the sound of birdsong. The visitor had returned and, with him, his mate. The birds dropped seeds from their beaks. Soon, green shoots broke through the earth. Time passed. Soon the song of birds mingled with the buzzing of insects and the rustle of leaves. Small creatures appeared, creeping amongst the jungle of trees. Wild animals slipped through the green shadows.

There once was a forest, near nowhere and close to forgotten, that was filled with all the things that everyone wanted.

And in the middle was a small house and an old man who had toucans, tree frogs and tigers in his garden.

Now draw a story of map of the story. Here’s Miss Parkinson’s to help you. Remember story maps are pictures that are drawn in order of all the main parts of the story and use arrows to point to the next part. This helps you to remember what to write when you write the story on your own.

Miss Parkinson has also written some words around each picture. These are words or sentences that Miss Parkinson wants to remember to use in her story writing. She has used adjectives, adverbs and prepositions. 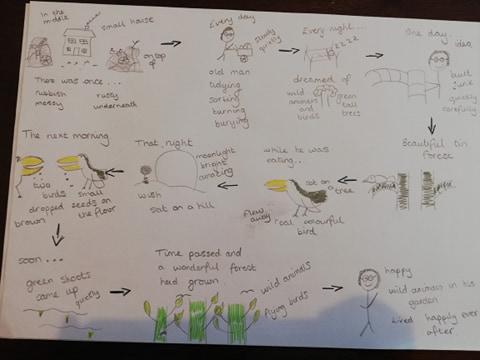 In your grammar lesson, you looked at the four different types of sentences. These are statements, questions, commands and exclamations.

Can you write one each of these types of sentences but about the story.

Here are some examples.

Statements – The old man made a wish.

Questions – What was making the noise in the tin tree?

Commands – Put the tin tree in the ground.

Exclamations – What a lovely bird that is!