Have a look at this information about different Anglo Saxon kings.

Edward was the son of King Ethelred the Unready and his second wife Emma and the half brother of Hardicanute. He was known as ‘The Confessor’ because he led a very religious life and he was a kind and thoughtful king. Edward built Westminster Abbey.

Edward married a woman called Edith in 1045AD. She was the daughter of the Earl of Wessex, Godwin. Edward and Edith did not have any children.

Godwin of Wessex:  Edward the Confessor had strong links with Normandy. He had grown up there and had the support of William, the Duke of Normandy.

Some people in Britain did not like this close relationship. Between 1050 and 1052AD Godwin, Earl of Wessex’s army tried to push Edward off the throne, but Edward’s army defeated Godwin and Edward sent him out of the country.

However, Edward did form a good relationship with Godwin’s son, Harold, who became king for a short time after Edward’s death.

Harold II: Edward the Confessor died in 1066AD and Harold became king. He was a strong leader and he fought hard to keep the throne.

In 1066, Harold’s army marches up to Yorkshire to stop Harald of Norway and his huge army from invading. Harold’s men killed Harald and thousands of his Norwegian soldiers in the Battle of Stamford Bridge.

However, only weeks later, Harold had to fight again! William, the Duke of Normandy, thought he should be king of England and so he and his army came to battle against Harold. Harold and his troops marched down from Stamford Bridge to face the Normans in the Battle of Hastings. 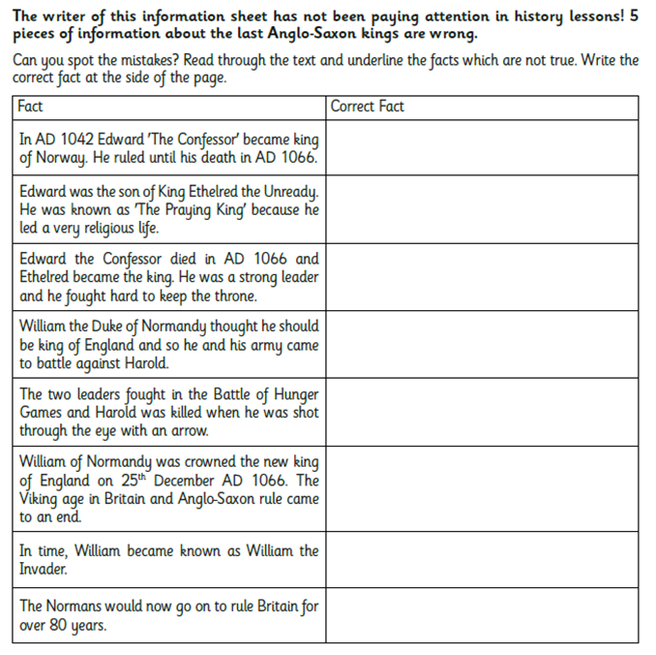